Above, Antonia and Mark a year after their rescue

December 2015 – In the East Sepik Province of Papua New Guinea, an emergency call went out on behalf of a woman named Antonia who was close to death as the result of trying to deliver her breeched baby. She lived days away from a doctor or a hospital. The weather was bad. Nerves were at an all-time high. But the call hit home with Samaritan Aviation’s Mark Palm because his wife had suffered similar pregnancy complications with their first child, and he knew he had to get to Antonia if she and the baby were to survive.

And he did. He flew Antonia directly to the Boram hospital where she delivered her son who is now a thriving five-year-old named Mark – yes, named after Palm, who saved their lives that day.

The reason? To demonstrate God’s love in remote areas where a critical medical crisis is often a death sentence – both physically and spiritually.

Palm told AFA Journal that PNG – the second largest island in the world with a geography made up of tropical rainforests, large rivers, and tall mountains – is one of the most remote areas in the world. At 700 miles long, the Sepik River is the longest of the rivers and comparable to the Mississippi River in size except without nearby roads for transportation.

“Eighty percent of the people living in this area are three to five days away from the one hospital [in East Sepik] via canoe and road travel,” Palm explained.

The Boram hospital is the only one within a 30,000 square-mile region and serves the 500,000 people living in that province, including the 200,000 who live along the banks of the Sepik River.

Therefore, the people of PNG, especially those living in East Sepik, must rely on aviation to meet their needs for medicine and care during medical emergencies. Otherwise, it’s too late.

Having grown up a pastor’s son, Palm has had a heart for others from a very young age. As a teenager, he assisted his parents in running a homeless mission in California and later served as a youth pastor and worship pastor as Samaritan Aviation turned from a dream into a reality. He has a degree in aviation technology and is licensed as a commercial pilot and aircraft mechanic.

His hand
Seeing the great need for aviation – and the gospel – in this area of PNG, Palm, his wife Kirsten, and their three children moved to Wewak, PNG, in January 2010 to begin flight operations in East Sepik. It was the culmination of 10 years of fundraising and preparations.

The flight to save Antonia and her son was his first flight. It came on Good Friday of April 2010 after he received the radio call from one of the 37 aid posts along the Sepik River.

In addition to the call that God has placed on Palm’s life, He has also equipped Palm with the aviation skills needed to operate a floatplane – a plane that is able to land on water and land.

“Having access to both is necessary to provide emergency access to the hospital and to be able to transport much needed medical supplies to the 37 aid posts located along the Sepik and it tributaries,” Palm explained.

Samaritan Aviation is the only ministry in PNG that operates a floatplane. The ministry does not charge for its flights. In fact, the government of PNG funds 50% of its operations and recently helped provide funding for a second floatplane that is expected to begin operations in 2016.

“We are basically offering access and hope for those who have none,” he added.

His hope
But this hope that they are offering goes far beyond medical care and a flight on a floatplane. Samaritan Aviation seeks to share the gospel in its purest form through relationships they are building with the people of PNG.

“People have to know you love them before they will be willing to listen to what you have to say,” Palm said. “In the PNG culture, relationships are the extremely important part of our ministry there.”

Palm also believes it is extremely important – and equally challenging – for him and his team to separate themselves and their culture from the gospel message.

“[I]t is easy for people to see us and the gospel as part of the same thing,” he said. “We want people to see Jesus, not our western culture, our denomination … or anything else we have brought in from our upbringing. … We are [only] the container that the gospel is brought in.”

That’s why once the gospel is effectively communicated to and embraced by Papua New Guineans, Samaritan Aviation works to empower the people through community development and discipleship. While the ministry does believe it functions as a solution to the need for emergency evacuations, medicine and vaccine delivery, and disaster relief, Samaritan Aviation sees its ultimate calling as training leaders to train people in their native language and culture.

“Our goals in the next four years are to add a second airplane, three more staff families, and to begin the Community Health Evangelism program in 50 villages,” Palm said. “Then, our goal is to duplicate this floatplane ministry in other remote provinces in PNG.”

Palm is depending on fellow believers to pray and give in the effort to meet these goals in the coming years.

“We are looking for individuals to partner with us as we strive to share God’s love through action to those in the remote areas of Papua New Guinea,” he said. “It has been amazing to see the many miracles that have happened, and we just thank and praise God for His faithfulness to the call He gave us.” 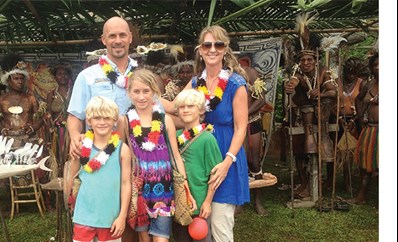 Families in flight
Family is key to Samaritan Aviation. In addition to Mark Palm’s family, whose wife and kids have been known to work as ambulance driver, medicine delivery flight assistant, and hospital minister among other roles, there are two other families who have given their lives to serving through Samaritan Aviation.

The John Smith family from Illinois arrived in January 2015 and became the ministry’s second pilot family, taking pressure off Palm as the sole pilot. The Chris Cooke family from Michigan joined the ministry in May of this year as medical director.

“[And] the exciting news is we have a few more families going through our candidacy process,” Palm told AFA Journal. “We are really encouraged with the hearts and skillsets of those preparing to come.”