June 2019 – Five-year-old Will was excited one Sunday morning when he saw snacks being passed down the pew at church. But when he reached for a small cup of grape juice, his dad pushed his hand away. He just figured Dad was afraid he’d spill the juice.

After lunch that day, Franklin Graham explained to Will, his oldest son, the meaning behind communion, the remembrance of how Jesus died on the cross for the sins of all people, even young Will.

Faith of a child
“[M]y dad used communion to explain the gospel, and I surrendered my life to Jesus,” Will wrote in Redeemed. Will now has almost four decades of walking with Jesus, and it’s a life still surrendered. He likes that word surrendered better than committed.

“You see, we may change our commitments during different seasons of life,” he recently told an audience at The Cove. “But if we truly surrender, we can’t
go back.”

Will (photo right, of Will and grandfather Billy Graham) is now executive director of The Cove, the Billy Graham Training Center his grandfather – “Daddy Bill” he calls him – founded in 1988 in Asheville, North Carolina.

Redeemed: Devotions for the Longing Soul, his first book, is an engaging collection of 50 personal and family stories mining decades of Graham ministry shared in the style of a true storyteller. Every entry is focused on a significant spiritual principle.

In a recent interview at The Cove, Will told AFA Journal that he had thought about writing a book for some time, but he wanted to proceed with caution, didn’t want to get ahead of the Lord. A publisher had approached him about writing in 2016, and he first said no.

He said, “When I began to pray about it, God said, ‘Now. It’s time.’ From the first, I had a collection of devotions in mind with family stories and world observations mixed in.”

That’s the plan he followed – family stories of childhood, experiences of being son and grandson to Franklin and Billy Graham, mischievous boyhood episodes, family relationships, personal failures, friendships, lessons learned, and more. And of course, there are stories from the hallmark of the Billy Graham Evangelistic Association – crusades (Billy), festivals (Franklin), and celebrations (Will).

First the gospel
In all he does, Will’s heart reflects that of his grandfather to reach the lost. That is evident when he talks about his hopes for Redeemed.

“Number one, I’d say I want it to lead people to Jesus Christ,” he said, “and number two, I want it to encourage people toward local evangelism, to instill more love for evangelism.

“At the very beginning of my book, I wanted to get to the gospel message. And I thought it needed to call for a response to God’s Word.” That’s no doubt why his very first Redeemed devotion is about his own salvation.

“Check your Compass,” another entry, illustrates Will’s transparency as he tells of the time when he had completed flight training and was set for his first cross-country solo. He had gone through the checklist, all was in order, and he lifted off the runway.

“It didn’t take me long to realize that I had messed up,” he confessed. “I thought I had checked each of the many boxes, [but] I failed to set the compass appropriately.” He had two choices – land and take off again properly prepared; or proceed depending on a less safe option for navigation.

“Sadly, I let my pride win out,” he wrote. He survived the incident, but he advises readers not to make wrong decisions when pride gets in the way.

His stories cover a wide range of such personal experiences as well as many accounts of his evangelistic events and the perspective he has gained of a world in need of the gospel.

Family affair
It’s a challenge to write about one Graham without writing about more Grahams. Father-son connections among the generations are a strong thread in the fabric of this family.

Billy Graham once said, “The greatest tribute a boy can give to his father is to say, ‘When I grow up, I want to be just like my dad.’ It is a convicting responsibility for us fathers and grandfathers.”

In addition to learning the gospel from his dad, Will told AFAJ a few other things he learned about fatherhood from his dad.

“I’ve learned by his faithful example,” he said. In a Redeemed devotion titled “Elementary Assignment,” he shows what a powerful impact a faithful father can have on a child. When his classmates wrote about wanting to be a professional athlete or other routes to fame and fortune, Will wrote that he wanted to be a missionary like his dad “so I can go to different countries and spread Jesus’s word.” (See below.)

“Dad and Mom’s daily routine included family prayer time in the mornings and family devotions at night,” Will said. “He always insisted that we be memorizing Scriptures.”

Fatherhood for generations
He has also learned that teaching about fatherhood does not end with one generation. He sees that in both past and present. For example, for Will and his three siblings, Granddaddy Franklin offers a cash reward for the first grandchild in each family who completes a Scripture memory program.

“Funny,” Will recalled. “There was no money involved when I was a kid.”

He realizes that he is doubly blessed by the example and teaching of his Daddy Bill. In “My Grandfather’s Best Advice,” Will wrote of once going to his grandfather for advice and guidance.

He anticipated “practical” tips on preaching style, how to urge people to respond to the gospel, etc.

That response may explain why Will today says he learned about humility from his granddad. In other of the Redeemed devotions, he shares moving moments of just being quiet when visiting with the great evangelist.

“We spent many quiet times together in his den,” Will said, “often watching sermons on television. When my grandmother Ruth died and I went to his house right away, we just took a quiet walk, hardly speaking at all.”

These days, Will and his wife Kendra – who also teaches Bible studies at The Cove – hope their children are learning by both the example and the instruction of Mom and Dad. Their oldest, 18-year-old CJ, is headed to college this fall. Rachel is 16, and Quinn is 13.

“Kendra and I have done everything we know to do,” he said. That’s how Will Graham prayerfully and carefully approaches life. Family and fatherhood, faith and ministry – everything he knows to do.

Did you ever hear of Billy Graham Jr.?
No? Well, there is one. The world’s most famous evangelist of the 20th century was William Franklin Graham Jr (1918-2018).

His son Franklin, president of Samaritan’s Purse, is the third; grandson Will, executive director of the Billy Graham Training Center, is the fourth; and great grandson Quinn, age 13 – no title yet – is the fifth. 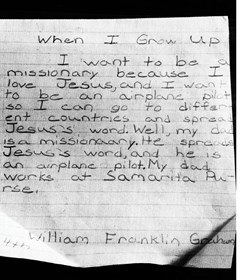