Faith, facts in ‘Patterns of Evidence’

Above left, the time line from Patterns of Evidence film. Right, Timothy Mahoney.

December 2021 – A child growing up in rural Minnesota with no television and little opportunity to consume media seems an unlikely candidate to one day own his own company producing award-winning films. But that’s Timothy Mahoney’s life.

Mahoney, an investigative filmmaker and founder of Thinking Man Films, has been involved in the video production business for over 30 years, intensely focused on exploring the credibility of the Bible.

Mahoney spoke with AFA Journal about his journey into filmmaking and his Patterns of Evidence series he has produced over the past 20 years.

“I was in high school, around 17 or 18 years old before I had my first experience of going to a movie theater,” Mahoney recalled. “A Billy Graham film, The Hiding Place, a movie telling the story of Corrie ten Boom, was coming to town, and I asked my mother for permission to go, and she let me.”

Both the movie and the experience of being in a theater proved so powerful to Mahoney, he went back three times in one week. That film sparked an interest and became what would blossom into his career and ministry.

Full surrender
After earning a two-year degree from Bible college, Mahoney began to sense a call to ministry.

“But I didn’t feel called to the pulpit,” he said. “I thought I was moving toward radio, but then I heard about the opportunity to sign up for film school.”

He followed that lead and eventually met his future wife, Jill. For their first date, he took her to a film lab.

“I told her I felt like God has called me to make films,” he said. “She’s been by my side and a wonderful support to me ever since.”

Times have not always been easy though. The early years required much patience and waiting on the Lord’s timing. To support his young family, Mahoney worked at a body shop painting cars to make ends meet.

“As I was approaching 30 years old, I thought ‘Lord, am I ever going to become a filmmaker?’” Mahoney remembered.

The stress of if, how, and when it would ever happen became a heavy burden.

“I finally said to the Lord, ‘Lord, if I never make a film for you, I will pray for those that do.’” Mahoney said. “Somewhat like Abraham with Isaac, I just surrendered it all and gave it over to the Lord.”

Finally, a job in film
Just 23 days before turning 30, Mahoney landed a job at an ad agency making commercials. He hoped to partner with the agency, but they were not interested in any new partners, so he ventured out and started his own company.

Within a couple of weeks, Mahoney learned about a Christian film association in the area, leading him to meet some Christian filmmakers. This was his introduction to the genre.

Over the next few years, Mahoney worked in various media avenues such as advertising, marketing, and assisting ministries such as the Billy Graham Evangelistic Association in promoting crusades and making documentaries.

All the while, he was gaining valuable experience and honing his skills, but Mahoney said he always felt there was something more, something else God was calling him to do.

Crisis of faith
In 2002, while in Egypt filming a documentary tracing the route Moses and the Israelites would have taken on their exodus from Egypt, Mahoney encountered a dilemma.

He met with renowned archaeologist and Egyptologist Manfred Bietak and asked him if there was any evidence to validate that Israelites once lived in the area. Mahoney was stunned when Bietak said no such evidence existed.

Having been raised in a Christian home, Mahoney believed the Bible was an account of real events that happened in history. If such major and even supernatural events truly happened, it would stand to reason there would be archaeological findings to prove it. To hear a professional say otherwise was troubling.

Mahoney finished his project in Egypt, but upon returning home, he could not shake his secret doubts and questions.

Patterns emerge
Not content with having more questions than answers, he set out to see for himself if evidence existed that would match and affirm the stories in the Bible.

Over the course of the next 12 years, Mahoney made between 250 and 300 filming trips, exploring, gathering footage, and learning about evidence that supports the Bible’s claims.

“During that process, this whole idea of a pattern of evidence started to make more sense,” Mahoney explained. “At that time, we didn’t know we would eventually call the films Patterns of Evidence, but the beauty is, we were using the scientific approach. We began to see patterns from the Bible emerging, but they were simply being ignored by others.”

Mahoney’s approach to creating his films is a bit different from that of others who have produced similar works.

“I believe our films are more like a fortress than a façade,” Mahoney said. “Many mainstream works aren’t necessarily based on truth. They are really propaganda films that look factual, but they have huge agendas, and they only show the parts they want you to see. We document multiple points of view, not just from Christians, but from non-believers as well.”

Mahoney has found that as a result, people who view his films feel freer to judge the evidence objectively. “They don’t feel as though they’ve only been shown partial evidence, or a façade,’ he said, “but they have heard from all the experts on both sides, and that frees them to make their own decision.” 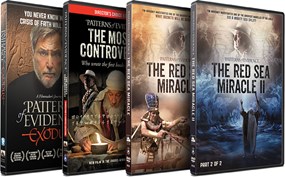 Three films, a fourth in production
In his own words, Timothy Mahoney shares a brief overview of the Patterns of Evidence series:

Film 1, The Exodus, explores whether there is evidence to prove the Israelites were once in Egypt. I was told there was none, but as we began to explore, we began to find proof of Joseph and his family in Egypt, the multiplication, slavery, plagues, and the Israelites leaving Egypt. The Exodus explores those events.

Film 2, The Moses Controversy, came about as a result of working on the first film. Higher criticism says Moses could not have been, and wasn’t, the author of the first five books of the Bible. If that’s true, it undermines the credibility of the entire Word of God. So we tackled this subject and traveled throughout the Middle East to see where the patterns would lead.Film 3, The Red Sea Miracle, Parts 1 and 2, seeks to answer whether or not there was a miraculous parting of water and crossing over by God’s children. It also explores the topic of miracles in general.

Film 4, Journey to Mount Sinai, is in production now. In it, we are looking at six different mountains, attempting to determine which one fits the pattern and is most likely Mount Sinai.

While there, Mahoney encourages visitors to click the “Thinkers” tab to sign up to become a “Thinker.” Each week, he sends out new informative videos and articles highlighting new evidence, expanding on the patterns that verify the Bible’s veracity.