July 2018 –“A guy in Missouri knew a woman contemplating abortion,” said Bishop Vincent Mathews (photo, right). “He had a friend who emailed another guy for help. In turn, that guy passed on necessary details to my wife. She called the woman without success but kept on texting, finally forming a relationship with the pregnant woman. 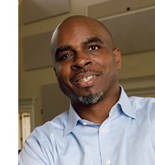 “We then found a church family’s home in one state for that expectant mother to live in until delivery, plus a loving family in another state to adopt her baby. It took several people in different churches across three states to save that baby and minister to the mother, but we did it.”

And the Church of God in Christ plans to do it over and over again, until the abortion of America’s black babies, of all American babies, comes to an end.

The silence
Slaughter, extermination, annihilation, genocide…whatever the term, no Bible-believing church in America should stand silent during the attempted obliteration of an entire race of people. But it happens – again and again and again.

More than 60 million babies have been murdered through abortion in America since 1973. While only 13% of America’s current population is black, more than 35% of those 60 million aborted babies were black. In fact, through legalized abortion, more than 1,000 black babies are aborted daily in America, a rate four to five times higher than that of other babies.

Abortion is the leading cause of death among blacks, killing almost three times as many African Americans as heart disease, strokes, and cancer combined.

For the Church of God in Christ, enough was finally enough.

In 2015, COGIC leaders took a stand, birthing Family Life Campaign, an unprecedented, denomination-wide crusade to end abortions and promote adoptions. With a predominantly black membership of over six million members in all 50 states and 87 countries, COGIC leadership felt a call from God to begin this five-year initiative.

Charles E. Blake Sr., COGIC’s chief apostle and presiding bishop, was adamant that FLC become a denominational movement. And since COGIC churches have been a part of the black community for over a century, Bishop Blake believed it was the right thing to do at the right time.

“Until now, there has largely been silence in African American pulpits on the topic of abortion,” said Mathews. “Most voices heard on this topic came from outside the church. We wanted to change that.”

The resolve
“At first, we met with quite a bit of passive resistance, due in part to the unbiblical indoctrination coming from those voices outside the church,” added Mathews. “Those outside voices had hardened hearts, blinding Christians to the truth of the Scripture.”

But COGIC churches throughout the U.S. are seeing resistance crumble through the powerful preaching of scriptural truths. And post-abortive COGIC members, mothers and fathers alike, are receiving the healing and forgiveness found in Christ alone.

In November 2017, FLC gained momentum when COGIC announced an official partnership with Human Coalition (humancoalition.org). Mathews believes this joint effort to combat abortions and increase adoptions is a radical move.

Mathews sees the partnership as a huge benefit for COGIC’s FLC because both groups can now work side by side to end abortion across the nation, one adoption at a time.

“Human Coalition will offer added education and training to our church members,” stated Mathews. “We can also use their technology and resources to reach more women who are contemplating abortion, women who might be open to adoption instead.”

Mathews emphasized that, in the past, the church as a whole failed to provide pregnant women of all colors with adoption as a viable alternative to abortion. He says the church talked the talk but did not walk the walk.

The solution
FLC seeks to walk beside a woman in the middle of a crisis pregnancy, step by step, demonstrating the worth of the mother’s life as well as the life of her baby.

“The church has forgotten that people are valuable to God,” Mathews said. “Throughout the Bible, we read of the enemy’s attempts to kill entire generations of God’s children, from the book of Exodus during the time of Moses all the way to the New Testament story of the Messiah.

“But many of our seminaries and Bible colleges have become totally secularized, failing to teach the absolute inerrancy of the Bible. In turn, we, the church, have rebelled against that scriptural authority by ignoring the God-ordained value of life.”

According to Mathews, repentance of that rebellion is the starting point for lasting change. And FLC is creating a national blueprint that other denominations can follow in the mission to make adoption a standard, established part of family life within the church.

Through adoptions, COGIC also desires to reduce the number of children repeatedly coming in and out of the foster care system. Mathews said the denomination plans to establish its own adoption agency, facilitating both domestic and international adoptions.

Hopefully, families in every congregation will open their hearts and homes to adopt both preborn babies and children within the foster care system. To help this hope become reality, FLC is growing a nationwide adoption network.

Mathews describes COGIC’s adoption network as a modern underground railroad of sorts. Through the denomination’s website and other social media tools, members link together nationwide, helping expectant mothers find hope for themselves and Christ-centered homes for their babies.

“Pray that abortion will become absolutely unthinkable,” Mathews pleaded. “We must abolish abortion. It has
to end.”

Join the 6.5 million members of COGIC in praying that:

▶ Men and women in the midst of crisis pregnancies discover that options are available.
▶ Christians will open their hearts and homes to children and babies in need of adoption.
▶ The larger culture will understand that abortion is destroying a human life made in God’s image.

For help with a crisis pregnancy, text COGICMISSIONS to 22828