Above, Tom Hanks as Mister Rogers

Editor’s note: This brief review of the movie A Beautiful Day in the Neighborhood is condensed from the December AFA Journal in order to include the bonus Q&A blog featuring Fred Rogers’s widow, Joanne Rogers. The review-and-blog combination is also accessible at The Stand, AFA’s blog site.

December 2019 – I still remember my favorite episode of Mister Rogers’ Neighborhood. Picture Picture, a behind-the-scenes segment, took us on a journey to a crayon factory and showed us how crayons were made.

A sense of nostalgia came over me when I found out about the upcoming film A Beautiful Day in the Neighborhood scheduled to release in theaters this Friday, November 22.

It’s described as “a timely story of kindness triumphing over cynicism, based on the true story of a real-life friendship between Fred Rogers and journalist Tom Junod” who learns “about kindness, love, and forgiveness from America’s most beloved neighbor.”

But surprisingly, it's not a family-friendly biopic about Rogers. It’s rated PG for strong thematic material, a brief fight, and some mild language – including multiple uses of the Lord’s name in vain. The storyline is centered around mature themes including the estranged relationship between a father and son, alcoholism, death of parents, and adultery. The film also plays a character’s multiple marriages as comic relief.

Objectionable content is balanced with the beauty of love, kindness, and forgiveness, and the movie highlights the value of investing in others, loving your neighbor as yourself, and looking for the good in all people.

Everything about the film points to man’s goodness – the goodness of Mister Rogers and the innate goodness in all people – as the foundation for a transformed life.

Believers know that type of transformation is contrary to Scripture, yet the faith-based promotion of the film may cause viewers to mistake goodness for the gospel.

The Stand: A Conversation With Joanne Rogers

Below is a Q&A with Joanne Rogers, widow of the late Fred Rogers. After screening the film that is being marketed as an outreach tool for churches, the interview gave me an opportunity to go deeper with Joanne about her life with Mister Rogers and his faith that the promotion of the movie touts.

The Stand: Tell me about yourself so our readers can get to know you.

Joanne Rogers: I live right in the Oakland area of Pittsburgh, which looks right onto the city. It's a wonderful place to live. I love Pittsburgh. I have one son who lives here and one who lives in Florida, which was my first home. I was born and raised in Jacksonville, Florida, and went to Rollins College in Winter Park in central Florida and met Fred there.

I was a sophomore by that time, I believe, and I graduated a year before he did. We dated through college and were very good friends and pretty good dates. When I left, he stayed on for a year longer, and I went to graduate school for piano. When I finished, he was in New York by that time doing an apprenticeship with NBC, learning the business. It always served him well, the time there.

I think they were very surprised when he decided to leave and come back to Pittsburgh. He was from Latrobe, which was 40 miles east of here. He came back to Pittsburgh because they were starting an educational television station, and he was interested in that. We moved here from New York.

TS: At what point did you marry?

JR: I finished Florida State for my graduate work, then we got married. We were just there [in New York] a year actually, as a married couple, when WQED came along. He moved to Pittsburgh then and that was in 1953, I think. … I continued my piano work, and I really wasn't interested in Fred's work.

TS: When you first met Mister Rogers what was the first thing that stood out to you about him?

JR: Interestingly, his energy. He had quite an energy but was indeed a calm person. He had a good time doing theater … in that day. He majored in music … composition, [and] he was getting a classical music background. … Fred had so many interests in college as he continued to have in life, generally. … He was just a very productive person.

TS: You spoke of his musical interests as well your piano work. I recall a scene from the film in which the two of you are sitting in your home, each at a piano, playing together. Is that something that happened in real life?

TS: What was it like for your family when Mister Rogers was in the prime of his television career?

JR: It was pretty normal because Fred really tried hard to have the work at the studio finished on time. Everybody wanted that to happen. He would come home usually around 5:30, and then he would say, “Give me 20 minutes.” He would have a nap for 20 minutes, then he went all hours of the evening until the boys went to bed. Then he did a lot of reading and a lot of writing; he wrote all the scripts. He answered all the mail. So, he did some of that in the evening, too.

TS: How do you think Mister Rogers would feel about the film if he were here to see it today?

JR: I think he would seriously value it tremendously.

TS: Now, I want to talk specifically to you about Mister Rogers' faith because that is an element that's supposed to come out in the film, and the film is being marketed heavily to churches. Do you recall a time in his life when he became a Christian?

JR: I can just say that he had a Presbyterian upbringing from Presbyterian parents and grandparents. He became a very, very inclusive Christian who was quite open to all religions.

The Dalai Lama was here in our part of the country, and they asked Fred to introduce him for a group nearby. He had a chance to get to know him a little, and he just loved him, you know. The two of them together were just so wonderful. I think he felt just as comfortable with him as he would have any other person

TS: We see a lot of the goodness of Mister Rogers, who he was, and how he genuinely cared for others. …

JR: He didn't talk the talk. He felt strongly that it would not have been inclusive if he had talked the talk to all of America's children. … [He] just [wanted] to be a model … for goodness. His assignment to us was [to] make goodness attractive.

TS: We definitely see the element of goodness in this film, but since it’s being marketed to churches, we don’t want viewers to mistake the goodness of Mister Rogers for the gospel of Jesus Christ.

What kind of impact did Mister Rogers’ Neighborhood leave on you as the wife of Fred Rogers?

JR: Oh, I was just proud of him. Mainly, I've kept myself out of it pretty much. I played the piano, and I just continued to do that. … I had a piano duo with a friend from college days, and we just went all over the place playing. Fred was very supportive of that, as I was of his work. 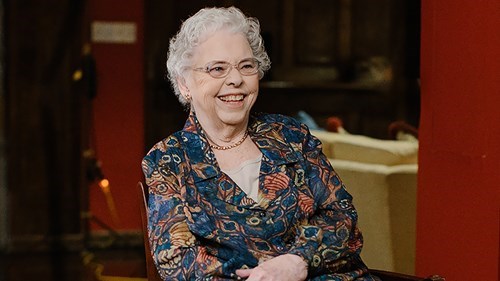