Shifting winds of culture or bedrock of truth?

October 2020 – American Family Studios (AFS), a division of American Family Association (AFA), has produced a new feature-length documentary, In His Image: Delighting in God’s Plan for Gender and Sexuality (IHI). It is narrated by Dr. Michael Brown, host of The Line of Fire radio program and author of Can You Be Gay and Christian?

AFA Journal: What motivated you to make a film about human sexuality?
Austin Brooks: We began working on In His Image about two years ago. Initially, it began with just discussion and looking into the issue.

Obviously, when you look at culture, you can see the issues. But probably the most disturbing part of this issue is how it’s affecting the church. Many in the church are compromising, and there is so much disunity. At first, none of us wanted to tackle it. But after prayer, we decided it was important and needed to be discussed. And for the last year and a half, we have met with a group of AFA employees to pray specifically over this project, the church, and our culture concerning these issues. We have seen God move in mighty ways because of that prayer time twice a week.

Kendra White: I started to realize how necessary this film was when I saw friends who grew up in the church who had memorized Scripture or attended Christian universities with me and started deviating from the Word of God. It was awful because it would start off just as a small concession, and eventually they would just completely walk away from the Lord, and when it’s somebody you love, one of your friends that this is happening to, it’s almost like watching them slowly drown. That’s when I knew that we had to make this film.

M.D. Perkins: Christians cannot escape the topics of homosexuality and transgenderism. It’s everywhere in culture. It’s even within our own families and close relationships with friends. So, we realized that Christians need to be prepared to present the Christian worldview and framework in an articulate and compassionate way, while bringing the whole heart and mindset of Scripture – not just the few key passages on homosexuality.

AFAJ: Why was it important to incorporate testimonies of men and women who have come out of sexual confusion and brokenness?
AB: In today’s culture, people often put personal experience above the authority of Scripture. But when a testimony aligns with Scripture, it is a very powerful thing. They are passionate about this topic. They’ve lived it. They’ve seen the transformative power of Christ and they want to help others find that as well.

All four of the testimonies shared in this documentary line up directly with Scripture – with what God has to say on these issues.

KW: In particular, Laura Perry talks about how the church community really came around her in a time when she was desperate for love and compassion, but also truth. This was a story of the church doing what God intended, which is loving – presenting her with truth and walking through life with her.

MDP: Testimonies are important because the conversation is shifting culturally through people sharing their stories. Most of this shift is the opposing side – people affirming homosexuality and transgenderism. So, if that’s the side that’s being presented commonly in mainstream media and on social media, then what about the other side of the story – people who came out of that and found freedom in Christ? These stories have existed throughout the history of the church. First Corinthians 6 says “such were some of you” when talking about homosexuals and people who had embraced different kinds of lifestyles. (Emphasis added.)

AFAJ: How and why did you address the scientific perspective?
AB: We knew it was important to include a science section because we see science naturally in our world. We can see how that correlates with Scripture and our Creator who made us. And we can actually use science to affirm what Scripture says.

KW: Children really are being abused through this pressure to have puberty blockers – to go down this path toward sex change surgeries. I didn’t realize how aggressive the medical community has been about getting people to adopt this ideology.

As we got into the subject, we realized how really gruesome and painful some of these procedures are. We debated whether or not to put it in the film because it is shocking and cringe-worthy. Doctors are mutilating people’s bodies. We need Christians to know this is happening so they can speak truth into this situation.

MDP: One of the things that people love to say is that Christians don’t really believe in science, that we have this ancient book that doesn’t really correspond to modern life. They say we dismiss anything new, modern, or scientific. And, of course, that’s completely untrue.

Christians hold to science, but we hold it underneath the authority of God’s Word. Science doesn’t define the world for us. It defines it in relationship to what God has already clearly said. So, we are able to look at how scientific research and study actually correspond to what [those in] the Christian faith understand about gender.

AFAJ: What kind of impact do you hope to see after the film is released?
AB: It may be very surprising to people how affirming the church has actually become. Christians have to know and be aware of what’s going on in our churches and our denominations and become a voice of truth in that context.

So, we hope this film will be a resource that churches use to bring them to the authority of God’s Word.

KW: We really believe broken people who watch this film will turn to Christ. There will also be parents who have children struggling with this who will find hope in the transformative power of the gospel. And people who are confused on this issue will find clarity. We know God is going to do that work. We have trusted God throughout this film.

MDP: I hope that In His Image strengthens the church, calls those who are lost and hurting to repentance and faith, and is able to put some backbone into Christians to stand firm in the culture. It is important for Christians to build upon something stronger than just the shifting winds of culture. We have to build upon the bedrock of the truth of Scripture. 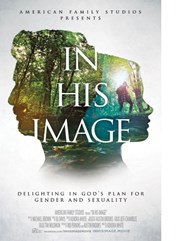 Nothing else like it
“Having been part of this important documentary from the first day, I can say with certainty there is nothing else like it, bringing together a wide range of experts, digging deep into the Scriptures, featuring powerful, life-changing testimonies, and showing just what it means to be created in God’s image. Every Christian needs to watch this video and share it with someone they love.”

In His Image, including bonus features and extended interviews, will be available this fall. For more information, go to inhisimage.movie.