October 2021 – In fourteen-hundred-ninety-two, Columbus sailed the ocean blue / He had three ships and left from Spain / He sailed through sunshine, wind, and rain / He sailed by night; he sailed by day; He used the stars to find his way.

Thus begins Jean Marzollo’s poem “In 1492.” Generations have learned it in grade school as they were taught about Christopher Columbus and his notable achievements and contributions to the world.

Unfortunately, with cancel culture being unleashed in recent years, the Italian explorer is one of the many victims who have caught the ire of the radical Left.

Reporting on the numerous monuments ruined during the protests last year, Jonah Gottschalk, writer for The Federalist, wrote in July 2020, “By far the most popular target was Christopher Columbus, with 33 statues in total having been defaced and pulled down.”

On October 12, 1492, Columbus and crew, on the three famous ships – Nina, Pinta, and Santa Maria – made landfall in the New World, a land they mistook for the East Indies.

The second Monday in October marks the day traditionally set aside to commemorate Columbus’ accomplishments.

Should he be celebrated though? Was he the hero so many were taught about in grade school, or is he the villain he has been made out to be today?

Who was Columbus?
Little is known of Columbus’ early days. In humble beginnings, he was born in 1451 in the Republic of Genoa, part of what is now Italy.

Even as a teenager, Columbus began making many trading and expeditionary voyages and learning the Atlantic wind systems and currents.

In his 20s, he relocated to Portugal, and ultimately settled in Spain. By this time, having traveled to parts of Africa, Ireland, and likely even to Iceland, Columbus had established himself as a professional and experienced mariner. Columbus gave God the credit for his abilities, stating, “He has bestowed the marine arts upon me in abundance.”

Why cross the ocean?
Just as most grade-schoolers could recite the beginning lines of the poem, “In 1492,” most could also give the simple textbook answer that Columbus was merely seeking a trade route to the Orient.

In part, that is true. It was believed the Asian islands near China and India possessed an abundance of herbs, spices, and gold; therefore, a combination of necessity and desire made a trip there seem like a profitable endeavor.

Trade routes through the Middle East, however, were dominated by Muslims. Islamic powers effectively shut down any land route to the East, making a voyage west across the ocean seem safer and more attractive.

Though part of his aspirations, a trade route was not Columbus’ only incentive to make the journey. Concerning his dream to set sail for this new land, he wrote:

[O]ur Lord opened to my understanding (I could sense His hand upon me) so it became clear to me that it [the voyage] was feasible… All those who heard about my enterprise rejected it with laughter, scoffing at me… Who doubts that this illumination was from the Holy Spirit? I attest that He [the Holy Spirit], with marvelous rays of light, consoled me through the holy and sacred Scriptures … they inflame me with a sense of great urgency… No one should be afraid to take on any enterprise in the name of our Savior if it is right and if the purpose is purely for His holy service.

Columbus first approached the Spanish monarchy in 1486 to secure permission and funding for his proposal of a three-ship voyage across the Atlantic. He was rejected a number of times, but a persistent Columbus finally convinced King Ferdinand and Queen Isabella of the worthiness of his ambition; and in January 1492, they agreed to finance the expedition. On August 3, the fleet set sail.

Who’s on the attack?
In recent years, revisionist historians, the cancel culture, liberal educators, and progressive Leftists have attempted to besmirch Columbus by labeling him a murderer, colonizer, slave trader, rapist, pillager, idiot, and a man who was simply lustful for gold and power.

In an article published in November 2019, David Barton’s WallBuilders ministry does a masterful job of presenting the most common modern lies about Columbus and the historical facts to clear them up.

Information in the chart below is borrowed from WallBuilders with permission.

What’s to celebrate?
The closing couplet of “In 1492” states, The first American? No, not quite. But Columbus was brave, and he was bright.

Despite being told by most professionals of his day that his goal was impossible, Columbus’ determination and vision undoubtedly changed the course of history. Though he was not the first to travel to the New World, he was the first to bring it to the attention of the Europeans, in a sense “discovering” it for them.

One would be hard pressed to study the life of Columbus and conclude that he was free of controversy or perfect in his theology.

A product of the medieval times, as well as a human with fleshly tendencies, Columbus certainly had his shortcomings.

But as American historian Samuel Eliot Morison wrote, “This conviction that God destined him to be an instrument for spreading the faith was far more potent than the desire to win glory, wealth, and worldly honors, to which he was certainly far from indifferent.”

As he concluded the log of his first voyage, Columbus stated simply: “I hope in Our Lord that it [the recent voyage] will be the greatest honor to Christianity that, unexpectedly, has ever come about.” 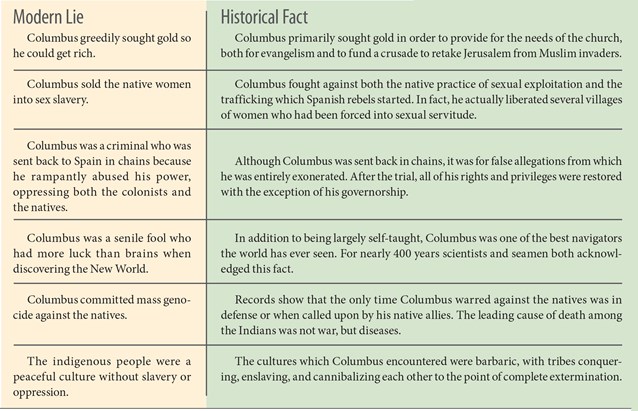