February 2015 – What can we learn about God from the sun? From seeds or water? Those questions are addressed in the first three episodes of Owlegories, a new animated series for children.

Owlegories follows the adventures of five young owls in their Theowlogy 101 class taught by professor Owlester. Joey, the class clown; Gus, the eater; Twitch, who was raised by bats; Violet, the perky girl; and Nora, the smart girl, team up to find how God reveals Himself in nature.

This series is great for young children with plenty of laugh-out-loud moments for the inner child of every adult. While the art of puns may be above the heads of children, it will keep adults engaged, and kids will want to watch this show over and over.

The repetition will be a good thing, as the series includes plenty of Scripture to memorize and lessons to learn. Kids can continue learning with the free Owlegories app available for Apple and Android devices. Just search “Owlegories” in your app store.

The first three episodes are available for purchase through the Owlegories TV app and at owlegories.com. Following the three episodes is a brief gospel presentation by Matt Chandler, pastor of the Village Church in Flower Mound, Texas.
Review by Teddy James 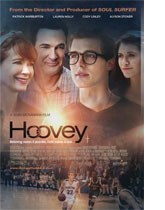 Hoovey
This gripping story is based on the real lives of Ruth and Jeff Elliott, an Illinois firefighter, whose son Eric (“Hoovey”) is dreaming of a college basketball career. When Eric suffers a brain tumor, surgery threatens his life. He survives, but is slow of speech, has weak vision, and walks with a cane. And though the doctor advises against his return to sports, Eric proves to be a headstrong and focused young man.

With the love and encouragement of his parents and his sister, he comes back to full health, and is able to rejoin his high school team. But the journey is not easy for the Elliotts. They’re swamped with medical bills, the farm is mortgaged to the hilt, their savings are gone and their credit is maxed out.

It’s a true and inspiring story, and the icing on the cake is that the Elliotts exemplify a strong Christian faith in their daily lives – e.g., Jeff teaches Eric Christian principles, prayers at meals, Mom and Dad pray over Eric in the hospital. The screenplay by Howie Klauser and production by Chad Gundersen are superb. Hoovey was scheduled to debut January 31.
Review by Randall Murphree

Return to the Hiding Place complements the 1975 film The Hiding Place, which told the true story of Corrie ten Boom and her family’s underground rescue operation that saved many Jews from death. The new film, scheduled to be in theaters February 6, is the story of young students who were known as Corrie’s teenage army. It is a gripping story of their faith and courage. A complete review ran in the May 2014 AFA Journal. For more information, visit christiancinema.com. 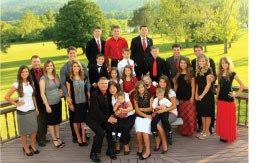 Bringing Up Bates
In the style of the Duggar family’s 19 Kids and Counting, the new reality TV series Bringing Up Bates opens a window into the bustling family scene at the Bates home in Tennessee. When Kelli Jo and Gil Bates married, they decided “to let God decide how many children we would have,” as Kelli Jo shares. And 24 years later, they have 19 children, ages 2 to 25.

As the first episode introduces the Bates family, they are preparing a baby shower celebrating the soon-to-arrive first grandchild. The viewer is filled in on recent events such as the marriage of three adult children and one daughter’s difficult miscarriage. Along the way, the family shares some of their values by praying over dinner, giving father-son advice on making family a priority, and pointing to God’s protection and provision for their children.

The conservative values of the family are obvious in other ways including modest dress, family teamwork, work ethic, and respect for each other. All episodes were scheduled to air on UPtv every Thursday for 13 weeks after the January 1 premier.

AFA Journal has viewed the first episode, which has no objectionable content and can be enjoyed by families with children of all ages.
Review by Stacy Long

Hallelujah for the Cross comes from the Newsboys, a veteran Australian pop band that emerged in the mid- 1980s. The band offers strong modern rock arrangements to “His Eye is on the Sparrow,” “It is Well,” “Holy, Holy, Holy,” and seven other hymns.

Hallelujah is highly produced, radio-ready CCM fare that features familiar instrumentation and mostly mid- and up-tempo treatments. The album is available on CD at traditional music outlets or as a download via newsboys.com.

Beautiful melodies, strong rhythms, and production that allows the acoustic instruments to shine provide a musical setting worthy of the timeless, Christ-honoring lyrics.