Above, the iconic Chick-fil-A cows are often featured in the company’s advertising.

December 2018 – In 2017, Chick-fil-A made more per restaurant than any other fast food chain that year. At $4.1 million in annual sales per unit, the chicken specialty chain stood high above its runner-up. Second highest was Whataburger with $2.8 million sales per unit.

That top figure is extraordinary, given a few factors that might have put Chick-fil-A at a disadvantage. First of all, Chick-fil-A has always closed on Sundays to allow not only management, but also all of its employees a day for worship — 52 fewer days to sell. Second, Chick-fil-A has always been transparent about operating by biblical principles — not popular in today’s cultural climate.

And third, Chick-fil-A has been the target of a bitter and vocal LGBTQ assault. That campaign and a boycott were launched after Chick-fil-A CEO Dan Cathy made public statements that he supported only the traditional Judeo-Christian model of marriage.

Ironically, some Chick-fil-A units experienced record sales during the days when anti-Christian opponents, aided by mainstream media, were marshaling their best forces to punish the chain. Overall, Chick-fil-A thrived despite the resistance. Its 2017 total sales hit $9 billion. 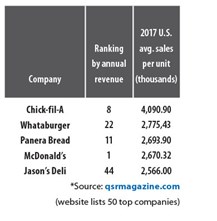 In the sales-per-unit list, Panera Bread was third with $2.69 million. McDonald’s came in fourth at $2.67 million sales per unit, and Jason’s Deli was fifth with $2.6 million. The analysis of the fast food chains’ annual sales is available at qsrmagazine.com.