From transgendered to transformed

November 2020 – Laura Perry surrendered her life to Christ and tried to be a good Christian “man” and “husband” to her live-in mate, who was a man identifying as a woman. Laura had received hormone treatment and undergone a double mastectomy.

She was known as Jake.

She had been living as a transgender man for nearly 10 years when she signed AFA’s Target boycott following the retailer’s 2016 announcement that its public restrooms could be used interchangeably, regardless of biological gender.

Though Laura used men’s restrooms on a regular basis, she could see the insanity of a policy clearly putting women and children in danger. But in her mind, the Target policy didn’t apply to her. Laura didn’t see herself as transgender. She saw herself as a man.

“I kept trying to pretend it wasn’t a sin,” Laura told AFA Journal. “But as I was convicted, I remember trying to justify it. I would think, Well maybe this was some kind of birth defect. I have some kind of genetic condition. I would go through all these things and try to find some reason it was ok.”

Confusing messages
As a child, Laura enjoyed the attention of her doting father and older brother. Though she longed deeply for affirmation and affection from her mother, painful stings of rejection, combined with misunderstandings and premature sexual activity, sent her into a seemingly inescapable entanglement of lies.

“I was raised in a church that had a lot of activity, and we were involved in every program,” Laura explained. “But I grew up thinking the Bible was God’s rule book, and if you were a Christian, you would obey it.

“My mom had grown up in legalism, and she was working herself to death trying to be a super Christian. I think she was absolutely exhausted, and she didn’t want me around. I was very hyper and energetic.”

When her calm, compliant brother received the hugs and warmth Laura coveted, she began to believe her mother liked boys more than girls. Laura’s relationship with her mother suffered, and her sister, who was several years older, was busy and often absent.

Laura had known her parents had planned specifically for three children, so when she learned of two brothers who died as infants before she was born, her insecurities multiplied. She began to see herself as the extra, unwanted girl.

She was first introduced to sexual activity at age eight by a boy only a year older. “It really began to change me,” she recalled. “I began to be sexualized at a very young age. It was hard because I was attracted to boys, yet I wanted to be a boy.”

Laura became more confused as she reached puberty. No longer acknowledging God in high school and college, her promiscuous heterosexual lifestyle increased in recklessness. And the disgust and shame she experienced inside her feminine body intensified.

Erasing Laura
By 2007, at age 25, Laura’s confusion culminated in a life altering decision.

“Why am I not happy?” she questioned. “Why am I so unfulfilled? I’m giving men everything they want, and they still don’t want me. I finally decided it was because I was really supposed to be a man.”

In the process of legally pursuing hormone treatments, Laura visited a therapist who tried to address her issues with her mother. But Laura wasn’t interested. She pushed for the therapist’s signature, needed to move forward with legally transitioning.

Soon, she was receiving massive doses of testosterone, growing facial hair, and experiencing a lowering of her voice. After she traveled to San Francisco and underwent a double mastectomy, she secured legal “male” status.

A few weeks after she returned to work, her fully supportive lesbian supervisor complained about Laura’s lack of motivation. The confrontation was confusing to Laura because she had been thoroughly enjoying the exterior changes prompting others to accept her as a man. Shouldn’t she be fulfilled? Shouldn’t she be truly happy and performing well as a result?

She was forced to admit underlying depression was accompanying the gnawing reality that she still wasn’t a man. The despair worsened, and she began to struggle with suicidal thoughts.

Discovering love
Then one day, her mother called and asked her to create a website for her growing Bible study group. Laura needed the work and experience, so she agreed to take on the project.

“I started reading her lessons so I could make summaries for the website,” explained Laura. “I was blown away. For the first time in my life, I began to see God with love in the Bible.”

As Laura’s excitement grew, she began to call her mother daily with questions about the Bible. “She was so loving, and not just full of religion, but she had faith,” Laura said. “I think at that point, I knew the gospel was true – not just in my head, but I knew it was real and living.”

During the year-and-a-half that followed, Laura tried desperately to live as a “man of God,” all the while living with her transgender partner.

“I was very sincere,” Laura said. “I began telling my friends about my new faith. I was growing and consuming the Word. I was listening to some kind of Bible teaching almost eight hours a day. I found out later the women in my mom’s Bible study were praying God would give me a ravenous hunger for the Word.”

Laura began meeting her dad for lunch on a weekly basis. As he talked about the end times and return of Christ, she began to share in his excitement. Soon after, her mother shared details of her study on the judgment seat of Christ.

“That night I was thinking about the judgment seat, and that’s when the Lord asked me what name He would call me,” Laura poignantly recalled. “It was a huge moment for me. In one sense, it was very hard because I wanted so desperately to know the Lord accepted me as Jake.

There was some pain in it. But, at the same time, there was so much love. The Creator of the universe was saying to me, ‘Let Me define you. Let Me tell you who you are.’”

Admitting truth
Laura and her partner began watching television programs about individuals claiming to be trans-racial, trans-species, and even trans-aged. “I knew those things weren’t true,” Laura said. “And the Lord was showing me this transgender thing was all in my head too.”

Then she heard a radio broadcast by Dr. Everett Piper, president of Oklahoma Wesleyan University. “He was talking about how we’re not just made up of our instincts, feelings, and desires.

That would make us like animals. But we are made in the image of God, and we can choose our behaviors. That was a radical thought. I did not want to hear it at first. So it really kind of made me angry. But I knew it was the truth. And that was the beginning of what drew me out.”

Laura committed to leave her transgender lifestyle. Still appearing as a man but desiring to surprise her parents, she went shopping for female clothing. It was a devastatingly awkward experience that left her sitting in her car sobbing.

After returning home weeks later, she was amazed by the way her mother’s Bible study group and church received her. The unconditional love was irresistible, and her commitment to change began to turn into reality as she learned to love and appreciate the beauty of God’s design for a woman, solidified through a group study of Divine Design. (See here.) 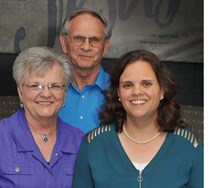 My parents (photo left, Laura with her parents) didn’t get it all right. They didn’t have some perfect formula. They did a lot of good things, but the one crucial thing was that my mom never gave in to calling me Jake. It was like a tether to reality. I tried so hard to erase the existence of Laura. I really wanted to forget I was born a girl. But that would always remind me.

I just want to encourage people to speak the truth in love even though it may be met with a lot of resistance. If you had spoken the truth in love to me back then, I probably would have bit your head off verbally. But truth is so powerful even when it makes somebody angry.

I think we’ve had the idea in this culture, that because Christianity was accepted for so long, people are going to love our message.

Jesus told us we would be hated. So, love people enough to be willing for them to be mad at you – be willing to be hated, because you never know what that seed of truth is going to do. Jesus said you will know the truth, and the truth will set you free. That’s ultimately what set me free. — Laura Perry

*This portion of Laura’s testimony was taken from a September 21, 2018, interview with guest host Meeke Addison on The Hamilton Corner (AFR networks, 5-6 p.m., Monday-Friday).

Resources
For those struggling with gender identity, as well as the loved ones trying to understand and help them, Transgender to Transformed: A Story of Transition That Will Truly Set You Free by Laura Perry is a must-read. Perry, a former transgender who found freedom and healing in Christ, tells her story and exposes the lies that keep so many trapped in a lifestyle of darkness – a darkness that can be overcome only by the light of Christ.

Laura now works for First Stone Ministries, makes herself available to those struggling with LGBTQ issues, and prays for the salvation of her former partner.