April 2020 – 1MM CAUTIONS: Disney’s Owl House not for kids
Currently airing on Disney Channel, The Owl House, introduces kids to a world of demons, witches, and sorcery while inundating young minds with secular worldviews that reflect the present culture. The show makes light of hell and the dangers of the demonic realm.

“The first episode is more than enough for most Christian families to realize that The Owl House, created by Dana Terrace, is not a cute, funny show – rather an extremely dangerous one,” said Monica Cole, director of AFA’s One Million Moms (1MM).

Terrace said it’s her aim to make “this demon realm a part of Disney.” On the contrary, it’s Cole’s aim to inform parents about the dangerous content coming from Hollywood.

1MM was referenced twice in the February issue of Billy Graham’s Decision magazine after 1MM petitioned Hallmark Channel to drop a Zola commercial that featured two lesbian brides kissing. Hallmark immediately responded by pulling the ad but reneged only hours later after pressure from the
LGBTQ camp. 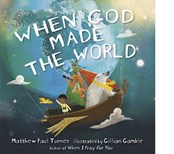 When God Made the World
In his newest book, When God Made the World, Matthew Paul Turner captivates younger readers with beautiful illustrations and a catchy rhyme scheme as he presents the story of creation. Throughout each of his vividly crafted pages, Turner explains creation through a child’s imagination.

Turner’s story of creation is loosley based on Scripture. The ever-present rhyme scheme makes it appealing to a child. The author does a phenomenal job of keeping the reader engaged and reminds readers that every child and every creature has a purpose in God’s eyes.

Available at online and retail booksellers.

The Art of Friendship
In a world that glamorizes shallow relationships and surface level social media interaction, healthy friendships can be few and far between. For young women, it can seem like an impossible task to find friends even in Christian communities.

In The Art of Friendship, author Kim Wier encourages women of all ages to see that good friendships are not an impossible ambition. She gives a candid look at what Bible-based friendship looks like and how important it is for spiritual growth.

Wier explains that in order to apply Scripture, one must let go of flawed expectations and strive for relationships that fit into the God-given blueprint that is written on the human heart. It takes hard work and sacrifice to be a true friend. One must accept people for who they are but also speak the truth to them in love.

The Art of Friendship is a great resource for women who want to take a step back, analyze past and present relationships, and set goals for the future. Available at online and retail booksellers.

Not Forsaken
At age 15, abuse survivor Jennifer Greenberg held a razor to her arm, contemplating suicide due to living with an abusive and destructive father. As she picked up the razor, she heard the voice of the Lord say, “I will never leave you nor forsake you.”

In Not Forsaken: A Story of Life After Abuse, Greenberg takes readers on a journey showing the impact of physical, sexual, and psychological abuse. Greenberg said, “No level of abuse is too minor to matter, and no survivor is too broken to feel God’s healing grace.”

An encouraging testament to the horrors of abuse, Greenberg offers her past as a teaching moment for others struggling.

She covers issues such as guilt, shame, and anxiety, and offers a practical resource for any survivor or counselor needing insight into how abuse personally affects the victim. Available at online booksellers.