In a world of chaos, Keep Believing

August 2020 – “I joined the church when I was nine years old through sort of a mix-up.”

That sounds like an unlikely start for one who would eventually lead an international ministry; however, it’s how Dr. Ray Pritchard of Keep Believing Ministries describes his story.

“On the bus returning from summer camp, the pastor called me to the front because he’d heard I had made a decision for Christ,” Pritchard recalled. “The problem was, he had me confused with my brother. I didn’t want to correct the pastor in front of the whole bus, so I just said ‘Yes sir.’”

“The pastor told me I needed to come forward and join the church, so that’s what I did, and I was baptized a couple of weeks later.”

Growing up in Russellville, Alabama, Pritchard was raised by parents who felt it was important for him and his three brothers to receive biblical training and instruction in the Christian life, so they were in church every Sunday.

At 16, while at a youth retreat, Pritchard encountered students from University of Alabama who gave moving testimonies about their personal relationships with Jesus Christ.

“I realized they knew the Lord in a way I didn’t, and I was wrestling all weekend long considering the difference between what they had and what I had,” Pritchard said. “It was so different, and I understood. Slowly, my eyes were opened over that weekend, and I realized I knew the Bible and I knew religion, but I didn’t know the Lord.”

“I came back from that retreat, and on Sunday afternoon June 21, 1969, about 5:15 p.m., I went out in front of my house, sat on the concrete steps, and I prayed a very simple prayer, not knowing what else to do. I said, ‘Jesus, if you’re real, come into my life right now.’ He was. And He did. And from that day until this, which has been now over 50 years, I have set my course to follow the Lord.” 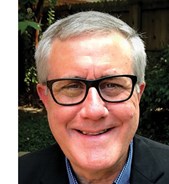 Dr. Pritchard (photo, right) spoke with AFA Journal about his ministry, the 2020 global pandemic, the future of the church, and evangelism.

AFA Journal: Where did the name Keep Believing come from?
Dr. Ray Pritchard: I wrote a book for Moody Press, and Moody came back to me and said, “Ray, we love your book, but it needs a different title.”

We didn’t start this ministry until 2006, but once that book came out, I couldn’t get those two words out of my mind.

I realized that’s the message God has given me, not just to help people come to faith in Jesus Christ, but to help them find the courage, hope, and the perseverance to keep on believing, no matter what.

And that really is probably the central message of my whole life and ministry.

So, when the time came to start the ministry, it was almost a no brainer. That’s how Keep Believing Ministries came into existence.

I have no doubt that God has allowed this to happen in order that people might begin to look up and listen to Him.

In some ways, we as a people, not Christians particularly, but the whole world, are sort of like Nebuchadnezzar, who, in Daniel 4, for seven years thought he was a cow and ate grass, and then the Bible says he looked up, he woke up, and he spoke up.

I believe that God is up to something here, and I’m praying that God is going to use this pandemic.

AFAJ: What is the condition of the church today?
RP: I think the easy days are over, but great days are ahead.

I think we’re going to discover a shocking truth as churches begin to open up – not everybody’s coming back.

Recent surveys demonstrate what we’ve suspected all along, not everybody who attended was really that deeply committed.

It’s sort of like the parable of the wheat and the tares. We’re going to discover that not everybody we thought we could count on is going to be there. The people who come back this time are the ones who really want to be there.

AFAJ: What’s the biggest challenge for the church going forward?
RP: The sooner we can get past this cultural Christianity and get down to the people who really want to serve the Lord, the better off our churches are going to be.

So even if our numbers decrease temporarily, I think it’s going to be like John 15, the pruning of the church, to get down to those people who can produce the good fruit that God can really bless.

What’s become clear is not everybody loves us out there. Theoretically, we’ve always known that, but the overt hostility against “the church,” and churches, and Christians has become really obvious. And I think the general disdain in which Christians are held in our society is only going to increase.

So, I would say to anybody, pastors everywhere, buckle up. It’s not going to be an easy ride from here on out, but go back to the parable of the wheat and tares. It ends with a great climax of good and evil. The wheat comes to a harvest and so do the tares.

AFAJ: Is there hope for the church?
RP: We’re going to see, in the days and years to come, evil as we have never seen it. And we’re also going to see the greatest revivals, the greatest awakenings, and multiplied millions of people are going to come to Jesus Christ.

Let’s face it, people are scared. People are wondering, Who can we trust? Who can we believe? Out of this general uncertainty, we’re going to find millions of people who have drunk at the broken cisterns of the world.

They’re going to come to the fountain of living water, and they are going to be saved. So, what’s ahead for the church? Great days of unprecedented opportunity and evangelistic harvest are just in front of us. If only we will take advantage of it.