As Rachel* stood in school that day, holding a Truth For Youth Bible, she could have chosen anyone as its recipient. But she chose Connor*, a prominent gang leader at the school.

When she approached to give him the Bible, Connor was indignant. He spat and cursed at her in front of everyone, humiliating her. However, this did not sway her resolve, and she left the Bible with him before walking away.

Although not many things are worth approaching an intimidating gang leader, spreading the truth of Jesus Christ is worth it, which is why Revival Fires International (RFI) hopes to inspire other students around the country to take the same courageous stand for the gospel.

Within RFI, one of the most important outreaches is called Truth For Youth (TFY). Each school year, Truth For Youth New Testaments are given to students in every state around the country to spread the truth about Jesus Christ.

Since the project’s beginning in 1995, TFY has distributed more than 2.5 million Bibles to students worldwide. Additionally, the ministry has received decision cards from over 25,000 individuals who have made a decision to follow Jesus.

“The light of the gospel is shining in those schools,” said Tim Todd, president of RFI. “I’ve seen young people who have become bolder than they have ever been before. I’ve seen a shift for the Bible, where the Bibles are distributed in the schools.”

During August 3-7, American Family Radio (AFR) will be partnering with TFY to help spread the gospel throughout schools in America. This partnership has thrived for 20 years and has seen more than 1 million Bibles distributed.

“It’s been AFR’s privilege,” said Jim Stanley, AFR general manager, “to join Revival Fires International in providing more than 1 million Truth For Youth Bibles over the past 20 years. This year we hope to put 65,000 Bibles into the hands of youth across the country to use as an evangelical tool to introduce their friends to Christ. This is part of our mission statement: that AFR aid the church in its task of fulfilling the Great Commission.”

Legal smuggling
In the early 1960s, a series of court cases took Bibles out of schools, starting a resistance in public education to the Word of God that continues today. Todd and others involved in his ministries are often not allowed to step foot on school campuses to hand out Bibles.

“The way that the law is interpreted,” Todd told AFA Journal, “adults are not able to go on school campuses to pass out religious literature.”

For the TFY campaign, Todd and his ministry have developed a legal response to this barrier. Instead of handing out the Bibles themselves on school campuses, Todd will hold a service at a local church and give the Bibles to Christian students. Todd then challenges those students to take the Bibles to the hallways and lunchrooms of their schools and distribute them to unbelieving classmates.

“We encourage [them] not to disrupt class,” said Todd, “but before school, after a lunch hour, between classes, [they can] get the Bibles to friends in school who are not serving the Lord. One way I like to describe it is ‘legally smuggling’ Bibles into America’s public schools.”

To better equip and empower each student in this outreach, the back of each TFY Bible contains an additional invaluable tool.

“We print the students’ legal rights on public school campuses on the back cover,” said Todd. “We put Number 4 in bold, and it says that young people have the right to give out Bibles on campus during non-instructional time.” (See below.)

Along with a complete New Testament, each TFY Bible contains faith-based comics at the front, which have impacted many students nationwide.

“[These are] powerful comic stories,” Todd described, “that deal with the truth about things that young people are up against every day. Things like drugs, drunkenness, peer pressure, pornography, sexual purity, homosexuality, cutting, sexting, bullying, school violence, suicide, and witchcraft.”

Each comic appropriately portrays the worldly aspect of the above topics, along with what it looks like to turn from sin and walk with Jesus Christ.

Light shining
Similar to those in other places and walks of life, the youth in schools desperately need the Word of God in their lives. Joseph Parker is the director of outreach and intercession for AFA and hosts The Hour of Intercession, a daily prayer-focused program on AFR.

“When a young person begins to read – really read and spend time in the Word,” said Parker, “the power of God found in His eternal Word can begin to guide and transform his or her heart and life wonderfully.”

Parker asks a very powerful and important question: “Why does the devil work so hard to keep the Word of God out of public schools?” The answer is obvious. “The devil understands that there is tremendous power, grace, and mercy in God’s Word.”

Parker is right, and Romans 1:16 confirms it: “I am not ashamed of the gospel, because it is the power of God for the salvation of everyone who believes.”

The Word of God contains the power to transform any life, and so many students walking the halls of public schools are in tremendous need of this transformation. Connor, the gang leader, was no exception.

After he received the Bible from Rachel, he sat down during lunch hour and read the comics at the front, each of which pointed to his need for Christ. When the day was over, he approached Rachel, this time with a changed heart.

He then promptly asked for more copies, so that he could give them to each member of his gang. That night, Connor showed up at the church where Tim Todd was holding a Truth For Youth service, and he gave his heart to Jesus. The following night, Connor returned to the church, this time with all 12 members of his gang, all of whom accepted Christ as their personal Savior.

Todd is confident this is a battle the Lord has already won.

“We’re not fighting for victory,” Todd exclaimed. “We’re fighting from victory! These young people who are going on our school campuses, who are armed with the Word of God, are taking back what the devil has stolen.

“And so when you’ve got the truth that is going onto school campuses, we’re seeing God honor His Word and setting people free. As a result of the freedom that these young people are receiving, we’re seeing a difference on the school campuses and in those schools where the gospel is shining bright.” 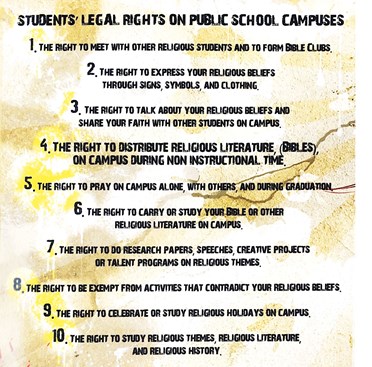 Students’ Legal Rights on Public School Campuses as they appear on the back of the Truth For Youth Bible.

Review of Case Dismissed
Tim Todd’s autobiography, Case Dismissed, tells his powerful story – one that begins with desperation and addiction but ultimately leads to the light of Christ. A family crisis early in Todd’s life sent him spiraling downward in a sea of drugs and alcohol, a journey that would not reach rock bottom for several years.

Todd tells his own story with complete honesty, sharing facts and feelings from his past that many others can easily relate to. Everyone has been there at some point, and Case Dismissed bears the all-important message: It’s never too late. No one has strayed too far to be out of reach of the Savior. There is hope found in Jesus Christ.