January-February 2019 – “I remember my first sermon was tilted toward lost people being saved, and several people were saved the first time I preached,” recalled Junior Hill.

But it wasn’t that way every time.

Hill continued: “I also remember the first time I preached and nobody got saved. I was so discouraged. And then the pastor at that church took me aside and said, ‘Now, Junior, you can’t expect people to get saved every time you preach.’”

Many preachers surely remember with excitement the first time they preached and someone responded by surrendering to Christ. Such a moment might not come until weeks or months, and dozens of faithful, persistent sermons have been delivered in a young preacher’s career. But for evangelist Junior Hill, a native of Hartselle, Alabama, his 63-year ministry started strong, reaping souls.

“I first started preaching when I was 17 years old,” he told AFA Journal. “My home church asked me to preach. I had never preached – I didn’t know a thing about preaching or sermon outlines. So I got a piece of paper and every time the Lord gave me something, I just put it down, and what I ended up with was about 17 points.”

Thus began what Hill considers his particular calling by the Holy Spirit.

“All of us have gifts in the ministry – gifts of the Spirit,” he said. “He’s called me to be a reaper. My ministry focus is to be a reaper of lost souls.

“Everywhere, I go to see the lost saved, and I pray beforehand, Let people be saved. And my wife Carole prays during the service that people will be saved.”

A gift for evangelism
Between 17 and 19, however, Hill was a football player on scholarship at the University of West Alabama in Livingston, Alabama.

“I felt like the Lord was calling me to preach, but I wanted to be a football coach, too,” Hill said. “But I knew that wouldn’t work. So I surrendered to the ministry in 1955, at the age of 19.”

After graduating from Samford University in Birmingham, Alabama, and New Orleans Baptist Theological Seminary in Louisiana, Hill served for 12 years as pastor at Woodland Avenue Baptist Church in Birmingham. But he still felt that was not the specific ministry that the Lord was calling him to. In 1967, he resigned his pastoral position to begin a full time itinerant ministry that has taken him across the country to preach in revivals, churches, conferences, seminaries, and state conventions, as well as in foreign crusades.

His humility and down-to-earth manner soften the brilliance of his success. He has received multiple Doctor of Divinity degrees, written nearly 20 books, preached over 1,700 revivals, and rubbed shoulders with great contemporaries and forerunners of the modern evangelical age such as W.A. Criswell and Vance Havner.

In Hill’s own estimation, he’s a “pretty dull” tool in the hands of a God who saw it fit to gift him in a way that coordinates with his abilities.

“The Bible says that He gave some to be pastors and teachers, some evangelists,” Hill mildly remarked. “It seems God has given me the gift of evangelism. That’s the gift God gave me from the first, and He’s honored that in my life.”

An encouragement for the church
God has also gifted Hill for another focus in outreach: a ministry to encourage the church, especially younger preachers. His sphere of influence – conferences, conventions, seminaries – puts him naturally in their paths. Or he often sits and visits with them in the living room of his home. His reputation as a well-known preacher makes him sought out as a mentor and a friend.

Hill accepts the job readily and welcomes all with open arms, with three words of advice:

• Number one, do all you can to keep your testimony clean. Ask God to give you grace not to give in to immorality. Not that God doesn’t forgive. God does forgive. But a man who loses his integrity is a wounded warrior, never quite what he could have been. Walk circumspectly and keep yourself morally and spiritually clean.

• Second, don’t let ambition be the center of your ministry. Sometimes young preachers are idealistic – “I want to pastor a big church. I want to be well known. I want to be somebody.” The danger is they lose their focus of where God has them, what He wants them to do. Wherever God puts a preacher is important. It’s never small. It’s never secondary. Young preachers have zeal, but it needs to be harnessed within the boundaries of where God wants them to be.

• Finally, there’s always the danger of a preacher trying to be clever or well-spoken. Sometimes a guy gets enamored with how he preaches, rather than what he preaches. Then, when he gets through preaching, he says, “Boy, I hope they liked me.” Rather than, “Boy, I hope I told them about Jesus.”

“I’m just a simple gospel preacher,” is how Hill describes himself. The endearing trademark of his preaching is that he strives to be clear and easy to understand. His goal is straightforward: to see people saved and to be an encouragement. And in a culture that has become increasingly unfriendly to Christianity, he finds an urging to faithfulness as a crucial message for the church today.

“Our day is a terrible day; I don’t have to tell you that,” he said. “Immorality runs rampant. The church is under assault. The culture is squeezing in, and the church is criticized, and Christians are scoffed at. As I travel around, I see great discouragement among
church people.

Hope for a future
At 82, after 63 years in the ministry, it would be impossible to keep going faithfully in the work God has given him without receiving a third gift from God: the gift of hope.

“So I have a sermon I preach out of Psalms (37:1), ‘Fret not thyself because of evildoers.’ I tell churches to rejoice, to know that they’re in the winning circle. It may not look like it now – but press on and keep doing what God has called you to do.”

The message he preaches is one that he also must preach to himself.

He admitted, “It is hard when you have lived your whole life having seen [people’s] openness to the Bible, and that does not happen anymore. We have two children and five grandchildren and even great grandchildren, and it can be tempting to worry about the future.”

But it is not a message of discouragement or defeat that has helped Hill gain an abundant harvest of lost souls or characterized his long ministry.

“We have the promise of God,” he reassured. “‘Let us not become weary in doing good, for at the proper time we will reap a harvest if we do not give up’” (Galatians 6:9). 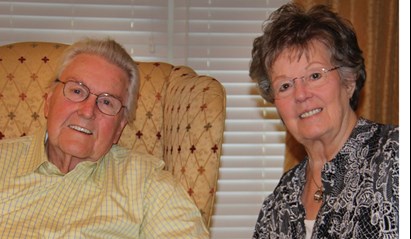 • They Called Him Junior: An Autobiography
• At Wit's End: Good Words for Bad Times
• Songs in the House: Memories From My Journey